Juan Arredondo was inspired to join the military by a Vietnam Veteran he interviewed for a high school project. After the Veteran shared his story and showed Juan his uniform, Juan knew it was the same path he wanted to take. He enlisted in the Army in 1998, deploying as an 14S Avenger Crewmember to Kosovo in 1999 and again to Iraq in 2004.

On Feb. 28, 2005, during his second deployment, Sergeant Arredondo was on patrol with D Company, 1/506th Infantry, 2nd Brigade Combat Team, 2nd Infantry Division, when his vehicle drove over an improvised explosive device (IED) in Ar Ramadi, Iraq. SGT Arredondo sustained multiple injuries in the blast to his arms and legs, including a severed hand and shrapnel damage to both his legs.

Juan spent a year in rehabilitation, re-learning daily activities and using a prosthesis on his arm. As a result of his injuries, he was honorably discharged in 2006, after seven years of service.

Juan now lives in San Antonio with his adult children, Juan and Rose. Since being injured, Juan has been helping his fellow Veterans as a peer mentor with Wounded Warrior Project by setting up engagement opportunities for Veterans and their families, and empowering them with resources. He would like to go back to school full time to finish his degree and possibly start a nonprofit one day. His ultimate goal is to one-day climb Mt. Everest.

Juan believes receiving a specially adapted custom Homes For Our Troops home will help him pursue his future plans. He is unable to utilize his wheelchair in his current home to ease the stress on his badly injured legs because it is not adapted. Juan says a single-level HFOT home with wide doorways will be beneficial as he ages and needs to use his wheelchair more often.

Originally from California, Juan is choosing to build his home in Texas, where he currently lives, to be close to healthcare and family. He also likes that the community is patriotic and supportive of Veterans.

Juan says he looks forward to the financial stability and peace of mind a donated home will bring. “I have moved all over the world and the United States, never really having a place to call home. I could not say ‘thank you’ enough times to HFOT’s donors and supporters,” he says. 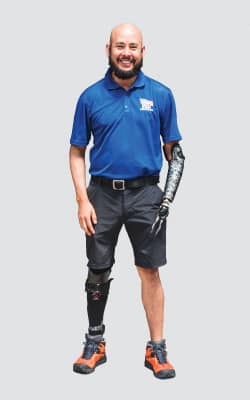