On May 30, 2010, Army Corporal Jeffrey Argrave was on his first deployment when he became paralyzed after sustaining major injuries to his spinal column from shrapnel through the neck and a C5 vertebrae fracture during a rocket-propelled grenade (RPG) attack followed by an ambush in Kandahar Province, Afghanistan.

While relieving a team on duty in a guard tower, CPL Argrave was receiving his back brief when an RPG hit the tower. Recovering from the concussion, CPL Argrave began returning fire at the five insurgents who initiated a fierce attack. Suddenly dazed, Jeff realized he had been hit when he saw blood on the floor of the tower. Unable to move, he depended on his teammates for his evacuation from the tower and into the care of the medic.

Transported by truck to the MEDEVAC point, CPL Argrave remembers hearing the medic praying out loud that he needed to hold Jeff’s head straight while en-route. The last thing Jeff recalls before falling unconscious was being loaded onto the Blackhawk helicopter. Waking in Germany two days later, Jeff was stabilized for transport to Walter Reed Army Medical Hospital where he spent more than three weeks before being transferred to James A. Haley Hospital in Tampa where he remained for nearly eight months.

Jeff married Heather Argrave on October 9, 2021. He now spends much of his time reading and watching movies, and enjoys anything to do with cars. 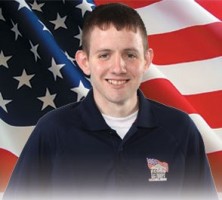