In February 2005, Army Specialist Craig Andrade was on his first deployment when an improvised explosive device (IED) blast near Baghdad, Iraq, left him with severe injuries including the loss of both legs above the knees and a burst eardrum.

While on patrol with his platoon, an IED hidden in the trunk of a tree was detonated, injuring everyone in SPC Andrade’s squad and killing his friend who was standing next to him. Medics applied tourniquets to both of SPC Andrade’s legs while the rest of the platoon pulled security until the helicopter arrived. SPC Andrade remembers not wanting to close his eyes for fear that he would never see his wife and young son again.

Upon arriving at the local hospital in Baghdad he fell unconscious, waking days later in Landstuhl, Germany. Eventually transported to Brooke Army Medical Center in San Antonio, SPC Andrade would remain there for four months recovering and receiving therapies. Having grown up in Marion, Tex., Craig is happy to have brought his family home to his roots.

Craig and his wife, Danielle have three children; Christian, Isabella, and Donovan. Craig enjoys spending time with his family. Going to the park and swimming are some of his favorite activities to do with them.

When asked if there was anything he would like to say to those who made his specially adapted home possible, SPC Andrade expressed his appreciation for all that has been done and is being done for him and his brothers and sisters in arms. “I appreciate the opportunity to receive a specially adapted home from Homes For Our Troops and am so thankful for the relief of stress for both my wife and I…we will now not have to worry about where we will be living in the future. Thank you for making this possible.” 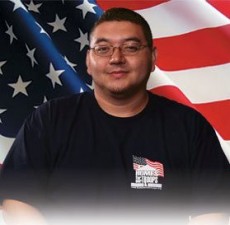