James “Matt” Amos was motivated to join the Marine Corps after the 9/11 attacks. At the time, he was working having recently finished high school. He enlisted as an Infantryman and deployed twice to Iraq and a third time to Afghanistan.

Sergeant Amos was three months into his third deployment when he lost both of his legs and broke his pelvis in an improvised explosive device (IED) blast in Sangin, Afghanistan, on June 9, 2011.

Late in the afternoon while on a security patrol with the 1st Battalion, 5th Marines, Sgt Amos had his squad performing a “sweep” of an alley searching for anything suspicious when he stepped on an IED resulting in the traumatic amputations of his right leg above the knee, his left leg below the knee, and a broken pelvis. Lifesaving measures prepared Sgt Amos for the medical evacuation by helicopter. Treated at Camp Bastion, he was stabilized for transport to Landstuhl, Germany.

Matt enjoys hunting, camping, off-roading, and playing golf. He especially likes spending time with his wife, Audrie, and their two young daughters. Matt is a member of the NRA and the VFW and is active in his church in Wichita and would like to further his education in the fish and wildlife field.

Matt’s specially adapted home has been beneficial in starting his own business making and selling beard oil called Admiral’s Pennant. The roll-under counter tops – where he mixes each bottle by hand – is a huge convenience. Additionally, from a financial standpoint, Matt would not have been able to start the business if he had a mortgage. “Being able to do this from a fully accessible, mortgage-free home is absolutely perfect,” he says. “I am truly grateful to Homes For Our Troops, their donors, and the folks who join up for a cause to help someone else.”

Matt is also the co-host of a new online show called “Adventures Enabled” that premiered in January 2018. The show takes injured Veterans on expeditions across North America to experience the healing power of nature. 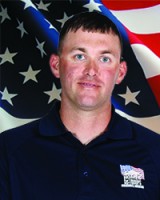