Shortly after moving to the United States from Colombia in 1999, Juan Amaris felt a desire to serve his new home country. As soon as he enlisted in the Army, he knew he made the right decision – he instantly loved the camaraderie and meeting people from different backgrounds and countries. He went on his first tour to Iraq in 2003 and deployed again in 2005.

On June 20, 2006, during his second combat deployment, Staff Sergeant Amaris was serving as an ammunition team chief with the 411th Artillery Regiment when he was severely injured in an explosion on his forward operating base (FOB) in Mosul, Iraq. SSG Amaris sustained burns to over 75 percent of his body in the blast.

Juan did not wake up from the incident until several months later while he was recovering at Brooke Army Medical Center in San Antonio. After five years of coping with the severe nerve damage to his hands, SSG Amaris made the decision to have doctors amputate both of them. He also has little range of motion in his elbows, shoulders, and neck due to scarring.

Now medically retired, Juan loves playing soccer, listening to music, traveling, and helping others. Most of all, Juan enjoys spending time with his three children and his wife Teresa Ceballos. In his current home, it is discouraging for Juan to rely on his family for help with routine activities like turning on the shower or opening doors. He says receiving a specially adapted custom Homes For Our Troops home will be a life-changing gift. Regaining his independence within his HFOT home, including a shower with digital temperature control, will empower Juan to continue rebuilding his life. He and Teresa recently started a Colombian food truck and are planning to expand the business. Teresa is relieved they will soon have a home where Juan will be living barrier-free and able to be fully present with their family.

Juan is choosing to build his home in Florida.

Juan is grateful to HFOT’s donors and supporters who will contribute to the building of his specially adapted custom home. “Thank you for the support and for bringing peace of mind to the Soldiers. This is a gift for life that not only benefits us, but also our families.” 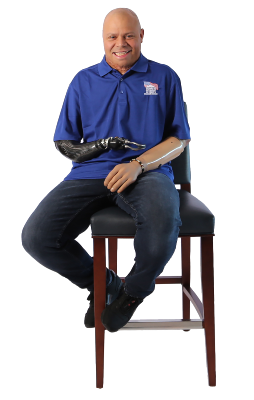