Marine Corporal Ammon Lang was on his first deployment when he lost both of his legs in an improvised explosive device (IED) blast in Sangin, Afghanistan on June 11, 2011.

While on a morning patrol with the 1st Battalion, 5th Marines, Cpl Lang was leading a group of eight Afghan Police when an IED was detected by a minesweeper in an abandoned compound. Instructing the Afghan police to turn around and leave the area, Cpl Lang stepped on an undetected IED resulting in the traumatic amputation of his left leg above the knee, and the eventual surgical amputation of his right leg below the knee.

Cpl Lang enjoys spending time with his wife, Kiri and their four children. They especially enjoy outdoor activities including camping. An avid car enthusiast, most weekends Ammon can be found working on cars for friends and family. He also enjoys hunting and woodworking and hopes to open a woodworking business building furniture in the future.

Cpl Lang is grateful to those who contributed to the building of his specially adapted home. He says, “Leaving the military is scary, leaving it as a disabled Veteran is terrifying…having an accessible house to call my home gives peace of mind to me and to my family. It truly warms my heart to see the amount of support and love our military receive; it makes me proud to be an American.” 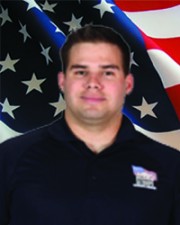