Christopher Aguilera joined the military after his college plans fell through. Having always loved planes, he decided on the Air Force. He enlisted in the mid-’90s and deployed to Korea, Singapore, Saudi Arabia, Africa, and several additional deployments to Iraq and Afghanistan.

On June 9, 2010, in Helmand Province, Afghanistan, during his third combat mission of the day, Master Sergeant Aguilera, serving as a Special Mission Aviator, was answering a medevac request to pick up a wounded British Commando when his helicopter was shot down. He was pinned by the aircraft’s transmission with life-threatening injuries, including dozens of broken bones and a punctured lung, and was on fire from the waist down. However, MSgt Aguilera still held off the enemy until his teammates on his sister ship arrived. MSgt Aguilera and HFOT home recipient Anthony Simone were the only survivors of the crash.

Once back in the United States, Christopher spent five months at Brooke Army Medical Center undergoing over 20 surgeries for his injuries, including the partial amputation of his right foot and left leg limb salvage. After an additional six months of rehabilitation at Nellis Air Force Base in Nevada, Christopher passed his PT test, regained his flying status, and re-deployed to establish the first combat rescue squadron in Djibouti, Africa. During that tour, Christopher sustained a severe infection to the remainder of his lower left leg, which forced him to have doctors amputate it. After his full amputation, he competed in several Warrior Games and the first Invictus Games, winning several gold, silver, and bronze medals before retiring from the military in January 2015 after 23 years of honorable service.

Shortly after retirement, Christopher met his wife Jennifer Flanagan, and they are now happily raising their young son Liam. Christopher loves being a husband and father, but his injuries prevent him from being the provider and protector he desires. The family currently lives in a two-story home with a steep driveway and various levels throughout the house, making wheelchair use impossible. The pain he experiences from wearing a prosthetic all day limits his time with Jenn and Liam. It is frustrating for Christopher to watch Jenn take on most of the parental duties, since he cannot tend to Liam when his prosthetic is off. Receiving a specially adapted custom Homes For Our Troops home will enable Christopher to care for Liam barrier-free, and take on more daily activities, like cooking dinner. Jennifer often worries about Christopher’s safety and looks forward to not seeing her husband in pain all the time. 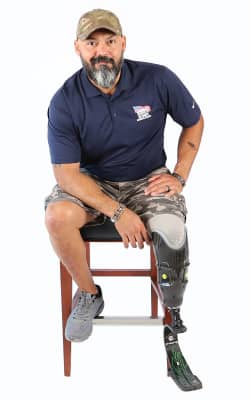