In March 2007, Army Specialist Adrian Garcia was only three weeks into his first deployment when he lost both legs after a rocket propelled grenade (RPG) attack in Ramadi, Iraq.

While on a routine patrol, SPC Garcia was manning the turret of an up-armored vehicle when the RPG attack shattered both of his legs. Never losing consciousness, and fully aware of what was happening around him, SPC Garcia was stabilized in country and then airlifted to Landstuhl, Germany, before being transported to Brooke Army Medical Center in San Antonio, with injuries so severe that both of his legs required amputations above the knee.

Now medically retired, Adrian is an avid reader and enjoys writing, swimming, and conditioning. He has a passion for screenwriting and cares deeply about the environment. He says his specially adapted custom Homes For Our Troops home enables him to carry out a new mission, spreading the word about pollution, deforestation, and extinction.

Adrian is grateful for the support of the community and the donors who are helped make his specially adapted home a reality for him and his wife Sarah. “We couldn’t be happier, thanks to Homes For Our Troops donors and supporters. Life in my home feels like a dream,” he says. “Everything is possible for me now in my own home, including cooking for my wife or doing the laundry. I no longer feel worthless. This home is my life.” 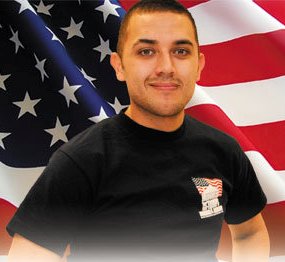