Army Sergeant Jeffrey Adams lost both of his legs due to injuries sustained while deployed to Afghanistan in August 2009. While on his second deployment, SGT Adams was returning to base from the Pesh River Valley when the Mine Resistant Ambush Protected (MRAP) Vehicle he was riding in ran over an improvised explosive device (IED).

Pulled from the damaged vehicle, SGT Adams has no recollection of what happened prior to or after the blast. Transported to the hospital in Bagram, surgeons amputated his right leg before airlifting him to Landstuhl, Germany, and finally to Walter Reed where his left leg was amputated as well.

SGT Adams loves hockey and having grown up in Flint, Mich., is a dedicated Detroit Red Wings fan. He would like to thank everyone who made his specially adapted custom home a reality, saying it means more to him than words can say.

Jeffrey is a stay-at-home father who is grateful for the ability to be there for his high school-age daughter, Jewel. Living in a donated home has given him the freedom to be home and support his family. After his Jewel finishes high school, Jeffrey hopes to pursue classes of his own. “This home has given me the ability to do things for my family that wasn’t possible before,” he says. 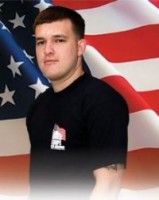