On July 12, 2011, while on his second deployment, Army Sergeant Matthew Spang was on a route clearance mission with the 130th Engineers in Afghanistan when his vehicle was hit by two improvised explosive devices (IEDs). The subsequent blast resulted in the loss of both of his legs below the knees and severe damage to his right hand.

Following his medical evacuation by chopper from the battlefield, SGT Spang was brought to Landstuhl, Germany for immediate treatment and then eventually brought stateside to Fort Sam Houston in San Antonio for rehabilitative therapies.

In the early weeks after his injuries, Matthew says he drew motivation from his family and friends. Although he has a great support system, he faced challenges in his ongoing recovery at home in his apartment, which was not wheelchair friendly.

In his previous home, the bathroom required him to crawl on his knees, and the space was too narrow for him to maneuver safely.

The specially adapted home he received in June 2015 changed his life for the better. Having a roll-in shower and roll-under sink ensures that he can complete his daily routine without worrying about slipping on a wet floor. Additionally, the customized features of the kitchen, including lowered counters and a roll-under oven cooktop, enables him to prepare meals for his son Tayden and daughter Trystan. Matthew’s dad Patrick is equally appreciative for those who helped give back his son some of his freedom and independence he lost due to his injuries.

Matthew is humbled by the donors and volunteers who made the conscious choice to donate and support his project. Says Matthew, “People like you are the reason why the United States is the best country to live in.”

Matthew is excited about the prospect of going back to school and obtaining his bachelor’s degree. With the mortgage-free home, he has more free time to enjoy going on road trips with his children and staying healthy and active through a variety of sports including wheelchair basketball, volleyball, golf, football, and soccer. 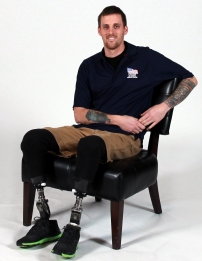