On Sept.19, 2007, Army Staff Sergeant Brian Schar was on his third deployment when he lost both of his legs above the knees and sustained nerve damage to his left arm when an explosively formed penetrator (EFP) hit his vehicle in Baghdad, Iraq.

While on a mission to another base, the platoon received word about a possible improvised explosive device (IED) in the road. As his vehicle slowed, SSG Schar looked out the window and saw an EFP on the side of the bridge they were crossing. It was at that moment the projectile was detonated, blasting into the side of the vehicle. Life saving measures by his platoon enabled SSG Schar and two other injured Soldiers to be medically evacuated to the Green Zone where they were stabilized for the trip to Landstuhl, Germany.

Having no recollection of his journey back to the United States, SSG Schar awoke to find himself at Walter Reed where he spent more than two and a half years enduring surgeries, and receiving treatments and therapies. SSG Schar enjoys gunsmithing and target shooting. He and his wife, Michelle are happy to be living in Colorado and moving forward with their future. Knowing that Brian’s specially adapted custom home is built to address his specific needs gives them a secure and stable environment to raise their two young sons.

SSG Schar would like to thank everyone who has supported him through his transition back to civilian life. Brian is grateful that his homecoming was not the same one received by his father and the other Vietnam Veterans after they sacrificed so much so that others could live a life of freedom and independence. He is especially grateful to those who helped make his new barrier-free home become a reality. 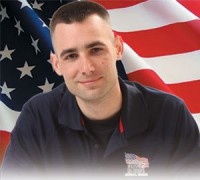