Luke McDermott was motivated by 9/11 to do something to help. Once he finished high school and a year of college, he enlisted in the Marines and loved it.

On June 9, 2010, during his second deployment, Corporal McDermott was on a routine security patrol with the 1st Battalion, 6th Marines, in Marjah, Afghanistan, when an insurgent detonated an improvised explosive device (IED) under his vehicle. Cpl McDermott immediately lost his right leg in the blast; months later, doctors amputated his left leg due to the chronic pain caused by his injury and to help aid in his long-term recovery.

Cpl McDermott began his recovery process in July 2010 at the Center for the Intrepid in San Antonio, regaining his strength and learning how to walk again. Now medically retired, Luke spends most of his time training and traveling with the U.S. National Sled Hockey team and with his wife Krista. In March 2018, Luke helped the U.S. Sled Hockey win a gold medal at the Paralympics in PyeongChang. He also enjoys handcycling, traveling and boating. After his hockey career is over, Luke’s future plans include enrolling in law school or pursue a teaching career. He would also like to dedicate more time to providing humanitarian relief assistance to those in need around the world. He has traveled with a nonprofit volunteer organization to Morocco to address various social issues.

Luke’s specially adapted custom HFOT home enables him to pursue his philanthropic and personal endeavors. The financial freedom gives him the foundation to focus on his education; additionally, the home offers him a comfortable and safe living environment. The widened hallways and open floorplan of the home provide enough space for him to maneuver his wheelchair, allowing him to set up a home gym so he can train for sled hockey. He also enjoys other special adaptations such as lower sinks and countertops in the kitchen, and a roll-in shower where he does not have to worry about slipping and falling.

Originally from upstate New York, Luke chose to remain in the state and build his home in the area to be close to family and friends.

Luke is grateful to HFOT’s donors and supporters and wants them to know the new home makes a difference. “I know several Veterans who have received a home through HFOT and each one of them agrees that it has made an incredible impact on their lives. I know it will undoubtedly do the same for me,” he says. 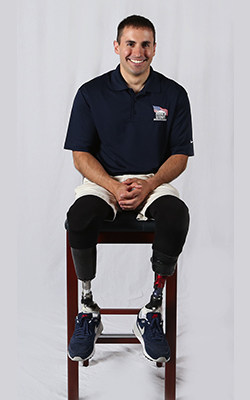