Drawn by the Marine Corps at a high school job fair, Daniel “Dan” Lasko decided then he wanted to serve. He enlisted shortly out of high school and, coincidentally, was sworn in on the morning of September 11, 2001. After the terrorist attacks, he knew it was his duty to serve. In 2004, Corporal Lasko deployed to Afghanistan as a vehicle machine gunner with the 22nd Marine Service Support Group for the 22nd Marine Expeditionary Unit.

On April 24, 2004, Cpl Lasko and his unit were on a recon mission when an improvised explosive device (IED) detonated as his vehicle drove through a pass in Tarin Kowt. Dan lost his left leg below the knee, and sustained a traumatic brain injury (TBI) and other injuries. He was eventually transferred to Bethesda National Naval Medical Center in Maryland for recovery.

Now medically retired, Dan leads an active lifestyle with his wife Jess and their two sons, Luke and Ben. He enjoys coaching youth sports, speaking at local events and schools, and competing in athletic events around the country. He has not let his injuries hinder his active lifestyle, but he still experiences obstacles within his current home. Dan’s home is built on a hill, and stairs inside and outside the home present a challenge on days that he needs to use his crutches, knee scooter or wheelchair. After coping with his injury for over 15 years, these obstacles have taken a toll on him physically, especially when his residual limb is irritated.

A specially adapted custom home will provide Dan and his family peace of mind and enable them to look forward, empowering not only Dan, but his entire family. He looks forward to the open floorplan that will mitigate the barriers in his daily life. The home will enable his family to have more time to get involved with the community, in particular with dog rescue organizations; his family has rescued three Labrador retrievers since 2015. A donated home will also give him the opportunity to continue his education, and the couple will have time to invest in starting a business of their own.

Originally from Pennsylvania, Dan is choosing to build his HFOT home in the Lehigh Valley area of Pennsylvania, where he and Jess grew up.

Daniel would like to thank HFOT donors and supporters for their continued support of our nation’s severely injured post-9/11 Veterans. “Because of you, we are able to live and lead a productive life without constant worry about our injuries or obstacles.” 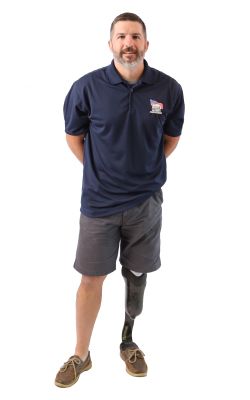