With no future plans and working a job that was not going anywhere, Brandon Korona decided to enlist in the Army to serve a greater purpose.

In 2013, Sergeant Korona went on his first deployment to Afghanistan as a combat engineer with the 2nd Brigade Combat Team, 10th Mountain Division. On June 23, 2013, he was on a route clearance mission with his unit when his vehicle was struck by an improvised explosive device (IED) in Paktika Province, Afghanistan. The explosion knocked Brandon unconscious, breaking his right ankle and every bone below his left knee.

Brandon spent two years recovering at Walter Reed Medical Center before returning home to Massachusetts. After four years of pain and a low quality of life trying to keep his left leg, Brandon made the difficult decision to have doctors amputate his lower left leg. He opted for an experimental surgical procedure called an Ewing Amputation at Brigham and Women’s Hospital in Boston. He is the second person to undergo this amputation surgery, which gives him the ability to control a robotic prosthetic with his brain, enabling him to perform complex actions and feel sensations.

Now medically retired, Brandon plays football on the Wounded Warrior football team and works at BAE Systems as a subcontracts administrator senior. He also has a master’s degree in operations and project management from Southern New Hampshire University.

Though Brandon has made significant progress in his recovery, he still experienced obstacles within his previous home. He described the split-level home he shared with his wife Chelsea as being “full of stairs,” which made it impossible for him to use his wheelchair. It was especially frustrating for Brandon on days where he could not wear his prosthetic due to skin irritations and limb soreness, and he was forced to use crutches to navigate throughout his home.

Brandon’s specially adapted custom HFOT home gives him the opportunity to live his life comfortably. He can now access all parts of the home without fear of falling, especially with special features like a roll-in shower. He and Chelsea became parents to their first child, Theo, in March 2021. Brandon says his HFOT home provides him with everything he needs, including the stable environment and peace of mind they need to raise their son.

Originally from Raynham, Mass., Brandon chose to build his HFOT home in New Hampshire, where he has started a life with Chelsea.

Brandon feels there is no way to thank the HFOT donors and supporters for what they have done for his fellow brothers and sisters in arms. “I am so grateful for the support I have had past and present. I am living my life for more than just myself; I live my life with meaning.” 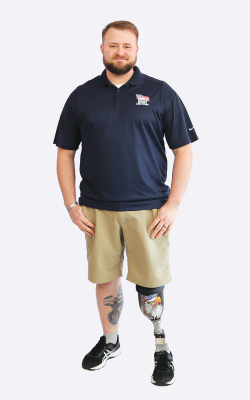