Army Staff Sergeant Wallace Fanene was on his second deployment in September 2007 when he lost his right leg above the knee and his right arm below the elbow in an improvised explosive device (IED) blast in Kirkuk, Iraq.

On one of his last scheduled missions during a fourteen-month-long deployment, SSG Fanene and his platoon were inserted by Blackhawk helicopters into Kirkuk. While patrolling near a village, he halted his squad and began pulling security. Upon pushing forward, SSG Fanene was hit by an IED blast, causing severe damage to his right eardrum and immediately engulfing the lower half of his body with a burning sensation as he sustained traumatic amputations to two of his limbs. Quick reaction by his roommate and Team Leader helped prepare Wallace for the medevac. His last memory before falling unconscious was hearing the voices of those who worked frantically to save him telling him, “You’ll make it…just hold on.”

Airlifted to Balad, Wallace was still unconscious while in Landstuhl, Germany, waking to the sound of his wife’s voice three days later at Walter Reed Army Medical Center. As he looked at his wrapped limbs, he knew that his leg was gone, but did not realize he had lost his hand and lower right arm as well until he was told. Transferred to Balboa Naval Medical Center in San Diego, Wally was pleased to be nearer to his home and his family, spending a total of 18 months in hospitals before his release.

A life-long surfer, SSG Fanene began surfing again post-injury as part of his therapies. He mentors other injured Veterans as well, making sure that anyone who wants to surf has the opportunity to do so. Wally enjoys Jiu Jitsu, weight training, running in marathons, snowboarding, and swimming. One of his main hobbies is growing and tending to his fruit trees. He most enjoys spending time with his wife, Scarlet and their young son and daughter. Scarlet is now working as a nurse. Wally says he is most thankful for the ability to carry on a somewhat “normal” lifestyle as a father and husband in his specially adapted custom Homes For Our Troops, celebrating every day he has on this earth. 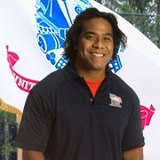