On Oct. 4, 2012, during his third deployment, Army Staff Sergeant Russell Dennison was on the second to last day of an operation with the 1-64, 3rd Infantry Division, in Kandahar Province, Afghanistan. He had just been promoted from Infantry squad leader to platoon sergeant the day before, and volunteered to take the lead with the metal detector. Everything was going smoothly until they were 50 meters from their pick up site when SSG Dennison stepped on a 15-pound improvised explosive device (IED), launching him 20 feet into a creek. After landing, SSG Dennison found he couldn’t stand and had to do half a push-up to keep his head out of the water. Seconds later the platoon leader picked him up out of the creek while SSG Dennison assisted him in patching up his wounds and calling for a MEDEVAC. When he arrived at Kandahar Air Base, both his legs were amputated. He also sustained a lacerated liver and broken femur in his right leg as a result of the blast.

For the first three months at Walter Reed Medical Center, SSG Dennison endured 28 surgeries. He received his first set of prosthetics shortly after starting outpatient therapy and within a few months was able to walk on them without crutches. A year after physical therapy, SSG Dennison signed up for the 25-mile Bataan Death March, a challenging march through the high desert terrain of White Sands Missile Range, held in honor of the Service Members who defended the Philippine Islands during World War II. SSG Dennison completed the route in 14 hours and “a lot of ice afterward.”

Now medically retired, Russell has a degree in welding. He also enjoys snowboarding, weightlifting and shooting. He says a home adapted to his needs helps him with these endeavors as he has enough space for his own work area for projects. Every year, Russell makes a trip to Arkansas to honor his fallen friend and comrade. Without the burden of a mortgage, he says travel expenses for this annual event are easier. Additionally, Russell says the open doorways allows him to easily get to the rooms of his son and daughter when they need him.

Russell and his wife Samantha are choose to build their home in Rutland, Wis., to be close to family. Russell says people like HFOT’s supporters truly make America the greatest country. “For you to give me and my family, people you hardly know, this great gift is overwhelming and I am blessed. I know myself and fellow Soldiers are not forgotten and we have amazing people like you to help us and offer your support,” he says. “From the bottom of my heart I am truly grateful and will continue to be for the rest of my life.” 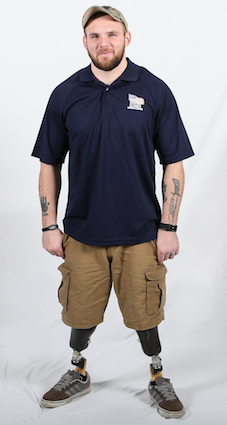 Building Partner for this Project

Mission Partner for this Project