A Cavalry scout with the 2/34 Armor from Ft. Riley, KS, Army SSG Joe Beimfohr was on his first deployment in July 2005 when he lost both of his legs in an improvised explosive device (IED) blast near Baqubah, Iraq. While returning from a mission, his convoy was stopped when copper wires were seen running across the road ahead of the first vehicle. Stepping from his truck to investigate with two other Soldiers, SSG Beimfohr noticed three wires running off of the main wire indicating that there were three IEDs meant to be detonated simultaneously.

While making their way to the suspected enemy observation position, the insurgents detonated the IED that was buried beneath the road, immediately killing one of the Soldiers and seriously injuring SSG Beimfohr; his left leg traumatically amputated below the knee as a result of the blast and the bones in his right leg so badly injured that it required amputation at the hip. He also sustained severe internal injuries.

Transported by helicopter to the hospital in Balad, SSG Beimfohr was placed in a medically induced coma and flown to Landstuhl, Germany before being transported to Walter Reed Army Medical Center where he awoke eight days later and learned of his injuries. He spent a year in the hospital, enduring surgeries, recovering from his injuries, and beginning his physical therapies.

After moving into his home in 2013, Joe continued competing in triathlons and marathons for handcycling. He completed his 29th Marathon and competed in an Ironman in November 2015. He returned to school and was pursuing a degree in exercise science.

Joe was an advocate for HFOT, often speaking at HFOT events and corporate events. He was also a devoted husband and father to his wife Cara and their three children.

Joe said his Homes For Our Troops home was life-changing. “Being able to come home to a home that is adapted to me and for my disability is a great stress reliever. As a wheelchair user, my day is filled with mobility impairments and challenges. My home is the one place that I know is always accessible to me and there is truly no limits to what I can do. Having that reassurance and peace of mind allows me to focus on the other parts of my recovery. There are no words that can express my appreciation for what this home means to me.”

Homes For Our Troops extends our deepest sympathies to the family and friends of Army Staff Sergeant Joe Beimfohr, who passed away at his home in Florida on Sept. 9, 2018, after a courageous fight with cancer. 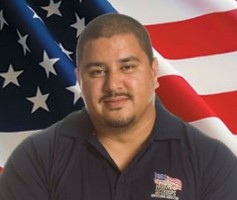