Army Sergeant Michael Beck was on his first deployment when he lost his left leg, and sustained injuries so severe they led to the eventual amputation of his right leg above the knee after a mortar blast in Baghdad, Iraq on April 6, 2008.

Having just returned to base in the Green Zone following a day-long mission with the 1132 Military Police Company, 95 Battalion, SGT Beck stowed his gear and went to see if he had any mail waiting for him. An “Incoming” alarm sounded sending everyone to the bunkers. The last one into the bunker, the mortar landed just behind SGT Beck. While trying to get to safety and moving further into the bunker, a second mortar hit, landing where Michael had been standing just moments before.

Injuring 14 members of his unit, the blast killed the staff sergeant who had been standing behind Michael. Knocked unconscious by the force of the blast, Michael would not wake for five days, not knowing that he had been rescued by his squad and treated for his serious injuries in Baghdad and Landstuhl, Germany. He arrived at Walter Reed Army Medical Center in Washington, DC., where he remained for four years receiving therapies and treatments.

SGT Beck enjoys fishing, four-wheeling, and helping people in whatever way he can. Michael and his wife Nadia intend to raise their children, Kloe and LeAnn, to be good citizens who always give back to society. Hoping to further his education and go into the field of prosthetics, SGT Beck would like to reassure others with amputations that life is not over, there is so much more yet to do in this world.

The Becks are grateful to be living in a Homes For Our Troops specially adapted home. SGT Beck stated, “Having a home that is accessible helps make my daily life so much easier. Just knowing that I won’t trip or fall on a regular basis makes things better for all of us. I want to thank everybody for making this dream come true for me and my family…and for so many other injured Veterans. We are so grateful.” 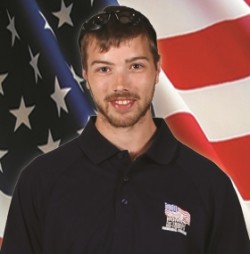