Growing up watching war movies and reading history books, Jace Badia always knew he wanted to serve in the military. Joining the Army turned out to be all he dreamed it would be. He loved the camaraderie and being on a team, and planned to make it a career.

A few months into his first deployment, on Nov. 11, 2006, Staff Sergeant Badia was serving as an Infantryman with the 1st Battalion, 18th Infantry Regiment, 2nd Brigade Combat Team, 1st Infantry Division when his vehicle was hit by an improvised explosive device (IED) in Ramadi, Iraq. SSG Badia lost his left leg and sustained severe injuries to the right leg as a result of the blast.

SSG Badia’s injuries did not quell his desire to defend the country he loves. He continued to serve and deployed to Afghanistan and Kuwait as part of the intelligence community with the 513th Military Intelligence Brigade, 202nd Battalion, after his injury. During this time he met his wife, Stephanie.

Now medically retired, Jace loves doing adventurous activities with his daughters and Stephanie. He likes hunting, fishing, hiking, SCUBA diving, and exercising. Though he and his family maintain an active lifestyle in the outdoors, he still uses a wheelchair in and out of the home. However, it is challenging for him to maneuver around the narrow hallways and doorways in his current home. A specially adapted Homes For Our Troops home with automatic doors, an open floorplan, and wide doorways will allow Jace to relax in his wheelchair, giving him more time to rest up for outings with his family. “This home will be a weight off my shoulders, and give me some of my life back,” he says.

Without the financial constraint of a mortgage, Jace and Stephanie will be able to provide the best education for their children and give them stability. “It will decrease stress, knowing my family will have a safe roof over their heads,” he says.

Jace says he cannot fully express how grateful he is to HFOT’s donors and sponsors who will contribute to the building of his specially adapted home. “I will be able to live each day in a home that makes me feel like the provider that I am. Every day of my life has struggles and difficulties because of my injuries, and now you have taken so much of that burden away from me,” he says. 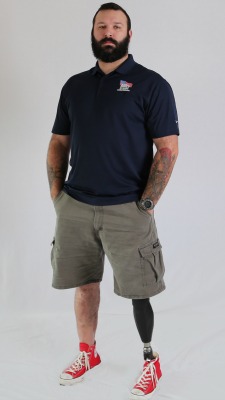