For Adrian Walker, serving his country was not part of his plan for the future. In high school, Adrian became interested in music and joined a band after high school playing the drums, but that route was not financially stable. After his short stint with the band, Adrian enlisted in the Navy as a Hospital Corpsman for the camaraderie and to learn new skills.

From January to April in 2013, during his first combat deployment with Marine Attack Squadron VMA-231 in Helmand Province, Afghanistan, HM3 Walker experienced intense physical demands on his body that included resupply missions and rucking a hundred miles a month. This resulted in Adrian developing bilateral compartment syndrome and popliteal artery entrapment. Adrian underwent several surgeries, eventually resulting in the amputation of both of his legs below the knee.

Now medically retired, Adrian enjoys spending time with his wife Esther and their two children, Jaden and Rylan. Adrian also has many hobbies, including content creation for social platforms Twitch and YouTube, playing music, boxing, exercising on his recumbent bike and woodworking. While Adrian has numerous interests and goals, he finds himself not having much time to pursue them because of the challenges he experiences on daily tasks within his current home. The biggest obstacle he faces is the bathroom, which he describes as hazardous; he has to crawl in and out of the shower.

By receiving a specially adapted custom home from Homes For Our Troops, Adrian believes many opportunities will be opened up to him and his family. He has seen firsthand the impact an HFOT home has on severely injured Veterans and their families. He looks forward to being able to access the entire home in his wheelchair, including outdoors. The pulldown shelving and roll under counters in the kitchen will empower Adrian to cook again. He even looks forward to being able to do daily tasks like laundry. He also plans to build the garden Esther has always wanted. He looks forward to paying it forward through volunteering, and is looking forward to the financial freedom the home will provide to do more activities together as a family.

Originally from Nevada, Adrian is choosing to remain in the state to stay close to family.

Adrian sincerely thanks HFOT donors and supporters. “Thank you for providing a safe place for my wife, my children, and me.” 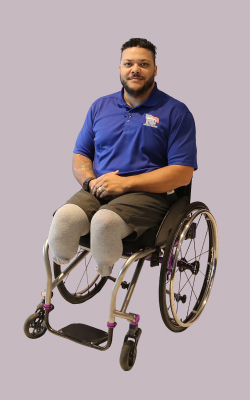