Army Sergeant First Class Charles Armstead was on his third deployment when he sustained serious injuries.

On May 2, 2009, while at his outpost in Hamman Al Alil, Iraq, SFC Armstead did not know that an Iraqi insurgent had already killed two Soldiers while infiltrating the outpost and had severely wounded the gate guard when he went to investigate a noise coming from the gate area. As SFC Armstead came upon the scene, he was shot in the stomach leaving him with internal injuries and shattering his right hip, while also causing extensive nerve and spinal damage.

Upon being evacuated to a field hospital, SFC Armstead underwent his first amputation surgery. Later airlifted to Landstuhl, Germany, a further amputation surgery was required, removing his right leg at the pelvis. Upon being stabilized, SFC Armstead was airlifted to Walter Reed Army Medical Center where he spent more than six months recovering before he was able to be transferred closer to home to Brook Army Medical Center in San Antonio.

Originally from Needville, Texas, SFC Armstead enjoys spending time with his wife, Tonia and their three daughters, Ashley, Amber, and Amauri. An active sportsman, Chuck enjoys wheelchair basketball, hand-cycling, and fishing. He competed on the U.S. basketball team for the 2016 Invictus Games and he represented the U.S. at the Japanese Wheelchair Championships in Toyko in October 2019. He hopes to one day earn a degree as a teacher or counselor.

Since moving into his specially adapted custom home, Charles says his life has changed for the better. He no longer struggles to get in and out of the bathroom or shower and he can maneuver his wheelchair freely in every room. His favorite feature of the home is the kitchen because it enables him to cook and prepare meals for his family. “The freedom HFOT has given me in this home has been amazing. HFOT was heaven-sent,” he says.

Charles is also appreciative of the lifelong relationship he has developed with HFOT and its staff. “Even now when the staff members call or message me, the receptions are so warm. It really feels like an extended family – and not just ‘here is a house and we’re done,’” he says. 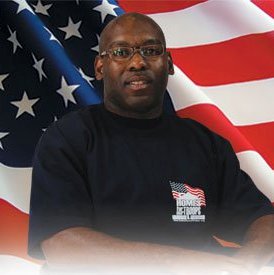