With college not in his foreseeable future, Thomas Akin joined the military.

On May 8, 2012, Army Specialist Akin was serving in Afghanistan with the 787th EOD Battalion as an Explosive Ordnance Disposal Specialist when his vehicle drove over an improvised explosive device (IED). The blast shattered his right foot and ankle, broke his left femur and tailbone, and inflicted a traumatic brain injury (TBI). In 2013, Thomas had surgery to amputate his right foot and ankle. A year and a half later at the Madigan Army Medical Center, Thomas had his right leg amputated below the knee.

Though Thomas has made significant progress in his recovery, the challenges of a non-adapted home have affected his daily living, and prevent him from having an active role with his family. In his current home, Thomas cannot wear his prosthetic for long periods of time, causing him to be limited to one room.

Originally from Penn Valley, California, Thomas is choosing to build his HFOT home in Texas because he loves the state and wants to be close to friends.

Thomas would like to thank the HFOT donors and supporters for this opportunity. “I do not have enough words to express our gratitude. The possibility of a house that is ours and set up so well means everything to my family.” 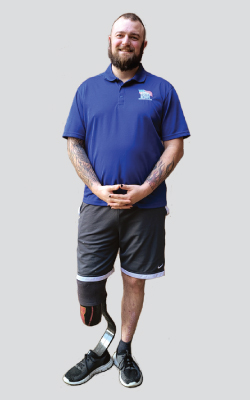